We've had such crazy weather....it snowed over pretty much the whole of SA this week!!
Ok, not in Cape Town because we're at sea level, but wow, the rest of the country was a white blanket! The photo below is of one of the lions in the Johannnesburg Zoo...poor thing, it doesn't know what to do in this white stuff! The last time it snowed in Jo'burg was when I was in Grade 9 (1999...long time ago!) We're also in for the storm of the year this weekend here in Cape Town with 65km winds, 80% rain and snow in the higher regions. If we're lucky, it'll snow on Table Mountain! Brrrr - duvet weather. 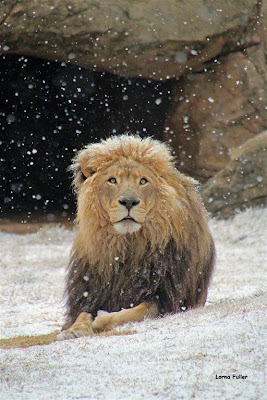 So, I managed to finish the challenge this week! Luckily I've done this tangle before, but I still battle to get the "hair" going the right way. I used Tangle Patterns string number12 because I was at a loss as to how to draw my string. I adjusted it slightly, but am quite happy with the result!

This last week at school, we had out Interhouse Netball Tournament (we've had it early because we have 2 weeks of no matches). It's always so interesting to see the players in different teams other than the match teams!

Well, the wind has picked up, it's now raining...so the storm has hit us!